Snow and Ice Can Cause Indianapolis Truck Accident Risks 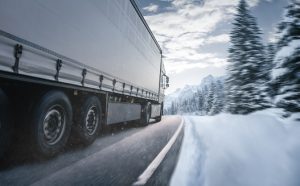 Driving a truck in the winter can be a dangerous proposition. Truck drivers need to contend with winter storms that cause snow and ice to be on the roads. While slick roads are always a concern, snow and ice can cause other problems as well. One big issue is snow and ice can collect on top of trucks and can be difficult to remove. Once the snow and ice has collected on the top of the truck, it could fly off as a trucker is driving. It could strike other vehicles or people, impeding visibility and causing truck accidents in Indianapolis and throughout Indiana.

Truck drivers need to be aware there are laws in some states requiring them to clear the snow and the ice from their vehicles. Even when no such laws are in effect, a trucker could be held accountable if ice comes off the top of his big rig and injures someone else.

Penske cautions truckers to be aware they could encounter different rules for snow and ice removal as they cross state lines. In some states, laws are already on the books regarding a mandate to remove snow, while other states are passing such rules and regulations now. Truckers will be expected to comply with local state laws and best practices for safety.

Trucking Info reported on one law related to snow and ice being proposed. The new law would apply to trucks weighing 48,000 pounds or greater. Drivers of these trucks would have an affirmative responsibility to take reasonable steps to remove snow and ice. Police would have authority to pull truckers over whenever they had failed in this responsibility and truckers could be fined. If a truck driver failed in the responsibility and snow or ice fell off and caused an incident to occur, the trucker could be fined up to $1,000.

In addition to fines, imposing an affirmative responsibility on truckers to remove snow and ice would make truck drivers more vulnerable to being sued if a crash happened. Victims of an accident could point to the safety law imposing an affirmative responsibility on truckers for snow removal and could use this to create a presumption of negligence if the driver had failed to remove the snow. The victim could thus have an easier time making a case for compensation when a collision happened.

Some trucking advocates are concerned about new laws being passed to make drivers affirmatively responsible for snow removal and to cite them when they fail. Snow removal is difficult on a tractor trailer. The top of a tractor trailer is made of sensitive fiberglass that cannot be walked on and that could be scratched when snow is being removed.  Snow throwers can be purchased, but Penske indicates these are very expensive. Some truckers use truck washes to try to get snow off, but this can be a time consuming process and can be difficult when deliveries must be made on a schedule. Still, efforts do need to be made to remove snow to prevent truck accidents which could otherwise occur.