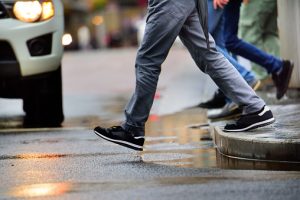 Just recently, an elderly man in Indianapolis was struck by a vehicle and according to The Indy Channel, he was taken to the hospital for critical care treatment. Drivers need to be aware of the tremendous risk of pedestrian accidents, and should take extra precautions to ensure they never strike a driver.

The recent accident reported on by The Indy Channel occurred at the intersection of 16th Street and Meridian Street. The crash happened at 11:15 PM when thousands of people were leaving downtown Indianapolis following a Fourth of July fireworks show.

The victim suffered "very serious" injuries and was transported to Methodist Hospital to be treated. The car which hit him was a silver Buick and news reports indicate the driver said they "just didn't see him [the victim] out on the street."  An investigation was still being conducted by police to determine exactly what had happened leading up to the collision.

Unfortunately, it is common for drivers to report not seeing pedestrians. There are lots of reasons why drivers may not see walkers. Some reasons are the fault of the driver, others the fault of the pedestrian, and others the consequence of bad road design.  Both drivers and pedestrians need to do everything they can to make sure a walker never goes unseen. Some of the things drivers should do include:

Pedestrians who are walking at night can help make sure they are seen by wearing reflective clothing and carrying flashlights. Staying on crosswalks and making eye contact with drivers before stepping into the street can also help to save lives.