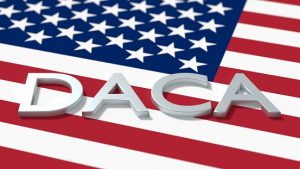 Our country was built by people who immigrated to the United States, but there has been a great deal of confusion and difficulty for those seeking to embark on the pathway to American citizenship. Immigrants who come to America through the Mexican border are often the first to feel the brunt of US policy and immigration enforcement.

Since the 2016 election, immigrants, particularly those who are beneficiaries of Deferred Action for Childhood Arrivals (DACA), have encountered more red tape and legal obstacles than previously imagined, according to the National Immigration Law Center. The final verdict for DACA is currently up in the air and may soon be decided in federal court.

The program was originally signed as an executive order by President Barack Obama in 2012. It makes immigrants who arrived in the United States as children exempt from deportation - allowing them to live and work in the country. They must have at least a high school education and no criminal record to qualify.  Since this legislation has been put in place, about 700,000 immigrants, also known as "Dreamers," have been approved under a waiver that must be renewed every two years.

Challenges for DACA participants under the current administration

President Trump vowed to eliminate the DACA program and set the deadline for March 5, 2018 unless Congress can implement new immigration legislation. However, that date has been stalled in federal court. In the meantime, those currently enrolled in the program are can renew their applications and are protected from deportation under certain standard terms and conditions, according to U.S. Citizenship and Immigration Services' website. But if the court's verdict is in favor of the Trump administration, thousands of enrolled immigrants can face deportation, an uncertain future

Some people have expressed concerns regarding the removal of DACA participants. Ike Brannon, Senior Fellow at the CATO Institute said, "If you keep the DACA recipients in the United States and you allow them to legally work and live here, not only is that going to be a boom for the economy that is, they're going to earn more money and they're going to pay more taxes."

Whether or not immigration agents will enforce removal of DACA participants if the executive order gets overturned is questionable. However, in a statement to CBS This Morning, Homeland Security Secretary Kirstjen Nielsen said, "It's not going to be a priority of the Immigration and Customs Enforcement to prioritize their removal." She further clarifies that if DACA comes to an end, removing Dreamers won't be a priority for ICE, unless a crime is committed.

Dreamers should be protected

Thus far, Congress has been unable to come to an agreement to balance Dreamer protection with stricter immigration laws. Trump has signaled willingness to extend DACA as part of a compromise on immigration reform; however, the Trump administration will only agree to protect Dreamers from deportation in exchange for money to fund the wall along the Mexican border, according to CNBC.

A bill sponsored by House Judiciary Committee Chairman Bob Goodlatte (R-Va.), as well as other House members, is currently in the works to provide protection for DACA participants while enforcing strict immigration measures. Other legislation has also been proposed by various members of the House and Senate. Thus far, neither house of Congress has managed to pass a bill.

The current confusion in the federal government has left many DACA recipients uncertain about their future status in the United States. Under the Trump administration immigration enforcement is tougher and more complex than ever. Additionally, ICE may take advantage of DACA participants who don't know their rights.

A Positive Change in Indiana

If you're a DACA recipient, you should be prepared for encounters with immigration agents. In the event that you are stopped, always produce identification and proof of DACA status. If any complications arise, don't hesitate to consult with an experienced immigration attorney.

Hocker & Associates LLC in Indiana has a vast amount of legal knowledge handling a variety of immigration cases. We'll  work for you every step of the way. Contact us today and find out how we can help you.